The Museum of Anatolian Civilizations (Turkish: Anadolu Medeniyetleri Müzesi) is located on the south side of Ankara Castle in the Atpazarı area in Ankara, Turkey. It consists of the old Ottoman Mahmut Paşa bazaar storage building, and the Kurşunlu Han. Because of Atatürk's desire to establish a Hittite museum, the buildings were bought upon the suggestion of Hamit Zübeyir Koşay, who was then Culture Minister, to the National Education Minister, Saffet Arıkan. After the remodelling and repairs were completed (1938–1968), the building was opened to the public as the Ankara Archaeological Museum.

Today, Kurşunlu Han, used as an administrative building, houses the work rooms, library, conference hall, laboratory and workshop. The old bazaar building houses the exhibits. Within this Ottoman building, the museum has a number of exhibits of Anatolian archeology. They start with the Paleolithic era, and continue chronologically through the Neolithic, Early Bronze, Assyrian trading colonies, Hittite, Phrygian, Urartian, Greek, Hellenistic, Roman, Byzantine, Seljuq and Ottoman periods. There is also an extensive collection of artifacts from the excavations at Karain, Çatalhöyük, Hacılar, Canhasan, Beyce Sultan, Alacahöyük, Kültepe, Acemhöyük, Boğazköy (Gordion), Pazarlı, Altıntepe, Adilcevaz and Patnos as well as examples of several periods.

The exhibits of gold, silver, glass, marble and bronze works date back as far as the second half of the first millennium BC. The coin collections, with examples ranging from the first minted money to modern times, represent the museum's rare cultural treasures.

Museum of Anatolian Civilizations reaching the present time with its historical buildings and its deeply rooted history was elected as the first "European Museum of the Year" in Switzerland on April 19, 1997. 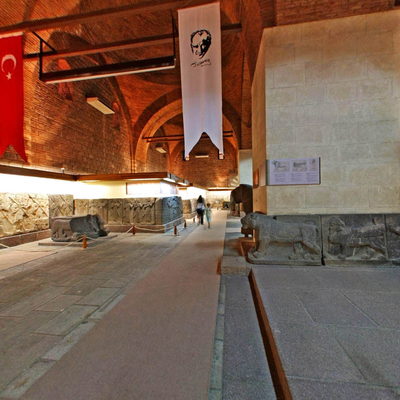