2 After World War II, high-submarine ships, as one of the first to have the power to stop and stroke. USS Gudgeon (SS 567) on 11 June 1952 under the name Porsmouth / USA launched. After serving in the U.S. Navy for 30 years, on 30 September 1983 in California, captured the Turkish ensign Khidr TCG chief, was delivered to the Turkish Naval Forces Command and the Submarine Squadron entered the establishment.
Turkish Naval Forces on active service after the end of February 9, 2004, the Naval Headquarters and Museum Ship changes made ​​by the Kocaeli Metropolitan Municipality, as of October 29, 2004 İzmit / Kocaeli, Turkey began to be exhibited. 87 m long and weighing nearly 2 tons next Muhribinin effort TCG TCG Barbaros Hayrettin Pasha HIZIRREİS such as the fact that the name of a member of the Turkish navy said.

Per capita living space of 85 staff personnel thoroughly narrowed his submarine. Even if only one person saw while visiting areas of this narrow submarine duty soldiers forced once again and demonstrates the difficulty of living conditions. Ranzalarına it was said, a warm bed, a bunk bed lay confined erimizin the start of work the other way, it can not find the name provided at the opportunity to cool bunk bed.

Have taken the lead across the leagues under the sea submarine TCG Gayret'ten 6.5 years after the first submarine museum was opened on 29 October 2004 in Turkey. Consists of seven separate water-tight compartments learned that the submarine "sank float" and impellers with blades Gayret'in TCG welcomes the visitor at the entrance of the museum. 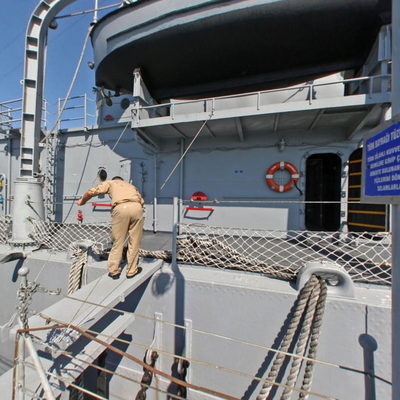